It’s never too late to go after your dreams. Here’s why.

How Can It Possibly Be Too Late For You?

Trust me, I completely understand this mindset. I was stuck in it for a long time. It took me a long time between realising I wanted to be a Film Director and actually starting to do that with any real gusto. I spent years wondering if it was too late for me to go after it, if I would ever get anywhere with it, and if I needed to start earlier.

While, yes, it probably would have made things much easier both mentally and in my career if I started earlier, I realised the irony of me asking these sorts of questions over and over again was that I was just wasting more and more time by not going after what I wanted. And, in wasting that time, I was wasting my life. I was wasting the opportunity to be the very person I wanted to be. I was wasting the opportunity to do the very thing I believe I am meant to do with my life! That’s just no way to live, no matter what your age or stage in your process.

But, more than that, I realised, “how can it ever be too late to go after what you want?” I mean, really. If you have discovered what you want to do with your life, you should do that no matter your age, no matter how long you have left it, no matter what the heck has gone on up until this point in your life. What would be the point in living if you did not go after your dreams? Are you seriously telling me that the point of your existence is to know what your ambition is and NOT go after it? Heck no!

I mean, really. Do you think the point of your life is to IGNORE and DENY the very thing you want to do? No no no no no. Imagine what that is like. You go through the motions, doing the same thing, day after day, all the while knowing you want to be doing something else with your life. Is that really how you want to live? I really hope not.

We are put on this Earth for a reason. Wouldn’t it be a HUGE disappointment if we wasted that?

“But I’ve Wasted So Much Time in My Life”

Just logically – why would we want to waste more time than we already have? It makes no sense!

But, the thing is, I understand the temptation. Sometimes you feel so far in to the negative space that it feels easier to just stay in there. I lived like this for the longest time (read: years). I had wasted so much time not going after what I wanted and I felt awful about it. I felt so bad that it felt easier to stay in that misery because getting out of it felt so damn hard.

I will write a longer post about this, but simply, what is going on there is that we are hiding in the comfort. Our brains know what it feels like to stay in the place of inaction and are getting certainty from this. Human brains tend not to like things they don’t know, as they want to keep us safe, so stepping in to something new feels inherently difficult. Staying in inaction is a known entity, so our brains gravitate towards it. In short, our brains are used to that feeling and they seek comfort in it as it is a known entity, and this creates a cycle – the more we stay in the zone of inactivity, the more our brains get used to it, and the harder it is for us to get out of it.

But, armed with this knowledge, we can also find a way out of the inactivity. In my case, what I realised is that if the human brain likes what it knows, then it just has to get to know the thing you want to do. So, if you have not gone after your dreams for the longest time, the best thing you can do is… well… force yourself to start. And then keep doing it. This sounds obvious… and it is. But it also works. The trick is, though, that you have to know going in to this that it is going to be damn hard. It is going to take you a lot of effort and time to change what your brain is used to. It takes effort to change what it likes. But, knowing that, you can approach this with a clear mind.

I will write a longer post on this, but the best advice I can give you right now is to start small. Do 10 minutes on the thing you want to do. Go in to it KNOWING that it is going to be hard, but also armed with the knowledge that the more you do it, the easier it will get. Much like going to the gym. Next time, do 15 minutes. Then 20. And so on and so forth. It sounds simple, but it works.

If you’re really in deep feeling like you’ve wasted so much time, then I encourage you to check out the linked post.

But I Feel Like There’s Not Enough Time Left

Well, guess what? You don’t need to be told that, becuase LIFE IS FREAKING SHORT. It’s easy to forget, and sometimes it doesn’t feel like it. But life is incredibly short. And no-one knows how much time they have left. In reality, there is never enough time left, because we are all dying! That is scary! And it should fuel you to go after what you want NOW with EVERYTHING you have!

If time is going to pass regardless, if you are going to get older regardless, if you have to do something regardless, would you not rather do the thing you know you want to do? I think if you were to look to the future and look back on the years that will pass anyway, you will prefer seeing that you went after what you wanted instead of not going after it.

Reframing The Thought That It’s Too Late

You absolutely HAVE to let go of the idea that you have left this too late. Easier said than done, right? Maybe. So, let’s try a useful trick. Perhaps we can reframe it. Maybe we can find a better meaning for this feeling.

Have you ever thought about the idea that perhaps you are coming at this thing you want to do at exactly the right time? Maybe now that you are armed with the knowledge that you have gained over your “wasted” years, you will actually do better with the thing you want to do. Have you had certain jobs that have given you skills you could use in your pursuit? Great! These are things you may not have had if you started earlier, and they may now help you to get further.

Did you meet your partner during your “wasted” years, and now have a really good relationship? Well that’s pretty bloomin’ excellent, don’t you think? You absolutely do not know you would have met them if you went after your dreams earlier on in your life. You may have been taken down a different route and your paths may never have crossed. This is something you can be really grateful for.

And if you really don’t think you have anything from the “wasted” years that could help you know, at least you have anger. That anger you feel at yourself for wasting time can be used as energy. Maybe that anger now fuels you harder than you ever would have been fuelled without it. Maybe now you have a REAL mission, and one that might take you much further than if you started going after your dreams years ago without it.

I know this seems like a trick and can feel fake. But it’s true. You really do not know what your life would have been like had you gone after your dreams sooner. You can speculate, but you don’t know. So get grateful for what you DO have now, and move forwards with that stuff as a positive. I understand that it can feel like hard work to reframe things, and sometimes you feel like you shouldn’t have to reframe things, or make yourself feel better. But this is worth it. It actually works if you keep practising it. It might take some time, but after doing it repeatedly, you will feel better about your situation.

If you are still stuck and still feeling like you have no time left, then there is a great exercise you can use that will help you to get some clarity. You can repeat this in any situation where you have to make a decision about how to act.

This technique is great for narrowing-down answers to situations you might find yourself in, such as the one in this post.

But I think you already know the answer in your gut – it is never too late. You just have to start, even though it’s scary.

Further reading for you: If you want to have a read on if you should even follow you dreams, check out this post.

If you are looking for some quick advice on dealing with regret, I encourage you to check out these best quotes on regret. 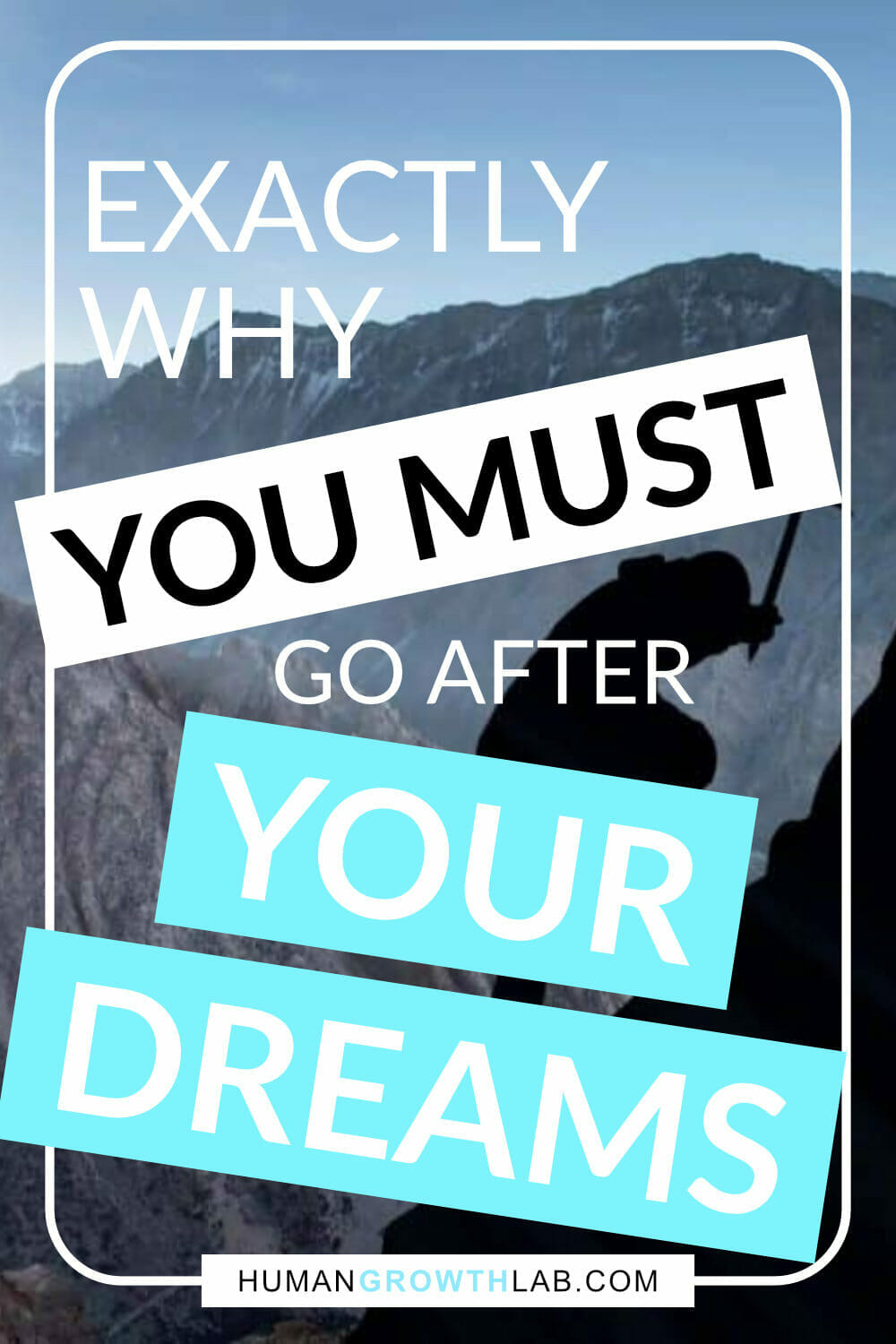 Disclaimer: Nothing on this website should be taken as medical or other professional advice. You should always seek the advice of a professional, qualified person.

It really helps the site to grow!

Found this content useful? Please consider buying me a coffee!

It takes a great deal of work to put out this content and there are no ads on this site to help support it.

Thank you for your generosity!

Get notified when new interviews and posts are live!